VPN aka Virtual Private Network is a quick way to achieve online privacy.

However, while connecting to VPN errors may occur, one such error is Windows VPN error 691.

At Bobcares, we often get requests to fix Windows VPN error 691 as part of our VPN Management Services.

Today, let’s get into the details and see how our Support Engineers fix Windows VPN error 691.

Are you wondering whether a VPN service is worthful?

If you have something to hide on the internet, a VPN is the safest way to do that. Especially when you are using public Wi-Fi or hotspots.

Basically, Virtual Private Network or VPN allows creating a secure connection to another network over the Internet.

A VPN efficiently encrypts the data between the user and the VPN server which makes it difficult for the attacker to get the right to access the data.

Also, it is legal to use a VPN and much more secure than connecting to the web via a standard way.

When we use VPN, any online communication is sent to the VPN server rather than to the default IP server. It has the following advantages too.

At Bobcares, where we have more than a decade of expertise in managing servers, we see many customers face problems with VPN connection.

A common error that frequently occurs while trying to connect VPN looks like below. 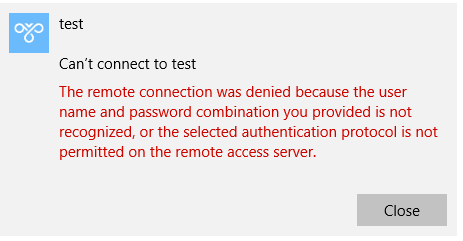 Now, let’s see the major reasons for VPN 691 errors and how our Support Engineers fix the top errors.

Recently, one of our customers had a problem with his VPN connection. After upgrading to Windows 8, he couldn’t VPN into his old Windows Server 2003 machine. He kept getting this error:

Error: 691: The remote connection was denied because the user name and password combination you provided is not recognized, or the selected authentication protocol you selected is not permitted on the remote access server.

Here, the protocol setting was causing the problem. Therefore, our Support Engineers took the following steps to solve the error.

1. We opened the VPN connections properties. 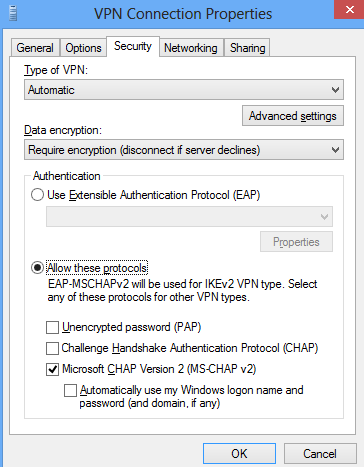 2. Next, we selected the Security tab.

3. Then, we selected the radio button for Allow these protocols and make sure Microsoft CHAP Version 2 is checked.

Similarly, many customers may get this VPN error because of bad settings in the Networking configuration. Sometimes, the windows server is set up to authenticate with just the username and password instead of domain name. When a VPN Client is attempting to log in with their domain, the VPN error may happen.

So, our Support Engineers right-clicked on VPN Connection and choose Properties. Next, we selected the Options tab and unchecked Include windows logon domain.

This is how we fixed the error.

In short, the Windows VPN error 691 may occur when there are problems with settings on the connecting devices. It can be either in the VPN client or server and results in authentication failure. Today, we saw the various reasons for VPN errors and how our Support Engineers fix them.

[ad_1] All service providers need a system to manage their user accounts, billing, and support. Their clients or customers also[...]