OpenVPN ssh key – Quick way to login to the server!

Looking for an easy and secure way to login to your server?

OpenVPN ssh key based connection helps to connect to the server efficiently. However, errors are common while setting up this SSH connection.

At Bobcares, we receive many requests to solve OpenVPN connection errors as part of our VPN Management Services.

Today, let’s see how our Support Engineers set up the connection and fix the related errors.

How to setup ssh key for OpenVPN?

As a matter of fact, VPN helps to have a secure connection to another network over the Internet.

OpenVPN is one popular open-source software that implements VPN. It uses SSL/TLS based protocol to establish a secure connection between the VPN client and server. Again for users who like to have quicker access to external servers, the ssh key method will be one of the best options. Moreover, it eliminates the need to remember the server password each time.

However, connecting to the server using OpenVPN requires a series of steps. Let’s now take a look at how our Dedicated Engineers implement it.

1. Firstly, we install OpenVPN on the server.

2. To run OpenVPN, we must have a user account on our server. So, we add a user using the command,

3. After that, we create the home directory for the user and the user directory needed for SSH. We also change the permissions and provide privileges to the user. Depending on the auth mechanism running on the server, we modify the server settings. For instance, if the server uses the sudo method, we add the newuser in the sudoers file. Again, in some other servers, we just add the user to the wheel group.

For users having difficulty in managing users via command-line, we recommend the use of a web panel. Here, we can also add and check the user permissions in the OpenVPN server interface. 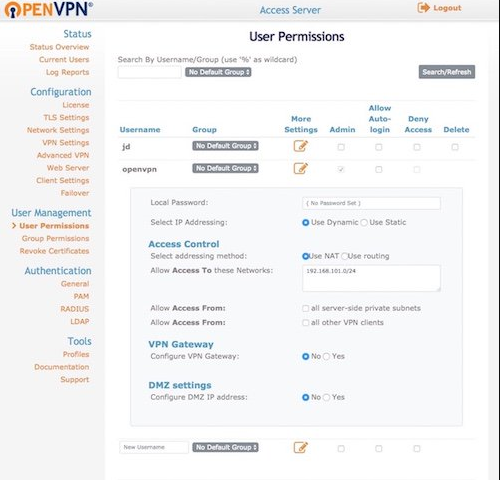 4. Next, we generate the SSH public key and private key in the client machine using the ssh-keygen command. The default location of the ssh public key is ~/.ssh/id_rsa.pub in the server.

5. We copy the public key to a file and move the file to the VPN server and execute the commands,

Now newuser will be able to login to the OpenVPN machine using the ssh private key.

Usually, users face many errors while connecting OpenVPN using ssh keys. Let’s have a look at some common errors and respective fixes.

1. Error in the configuration file

Recently, one of our customers approached us with an OpenVPN connection failed error.

Our Support Engineers checked the issue and found out errors in the VPN configuration file. The server address was set to some wrong hostname.

Therefore, correcting the server address in the OpenVPN client config resolved the error.

By default, OpenVPN uses UDP/TCP port number 1194. Some servers may have port forwarding rules that allow the VPN connection. Such changes in port number could also lead to an OpenVPN connection failed error.

Therefore, it is important to check the port number during OpenVPN connections based on SSH.

Sometimes, the SSL key used for SSL encryption/decryption can be different on the client and the server-side. This causes TLS out of sync errors during connection establishment.

Therefore, when the client and server are communicating with each other, we always ensure that they are agreeing upon the same TLS keys.

In short, the errors while connecting OpenVPN using ssh key mainly occur due to mistakes in the configuration file, port settings and so on. Today’s write-up discussed how our Support Engineers set up the OpenVPN ssh key connection and fix the errors related to it.

[ad_1] In today’s business world, people need access to everything on their fingertips. One of the most used tools in[...]

[ad_1] March 4, 2019 The investment aims to put enterprises at ease by leveraging their machine learning as well as[...]