However, users often confuse on moving the SSL certificate, especially when the server has expensive wildcard SSL setup.

A slight mistake while trying to move SSL certificate to another Apache server can make your website insecure.

That’s why, at Bobcares, we often get SSL certificate migration requests from our customers as part of our Server Management Services.

Today, we’ll see how our Support Engineers move the certificate to another apache server​ and fix the related errors.

When we need to move SSL certificate

An SSL certificate is really powerful in making the communication secure. And, this has a major role when your website deals with critical information like credit card data.

With modern hosting technologies, SSL certificates often has to be used on various servers. Particularly, when the website utilizes load balancing to distribute the site load across multiple servers.

Certificates like Comodo SSL certificates can be installed for unlimited number of physical servers.

How we move SSL certificate between the Apache servers

1. Initially, we connect to the server as root user and open the Apache configuration file at /etc/apache2/httpd.conf or /etc/httpd/conf/httpd.conf. Then, we find the SSL certificate, private key, and any intermediate certificates for the domain.

For that, we locate the < Virtualhost > section for the domain, where SSL was set up initially. It may be either in httpd.conf or in ssl.conf. Also, the location may differ based on the Apache configuration.

We use the below command to find the exact location.

For example, the results would look as:

2. Then, we copy those files to the new server using scp command as root user.

4. Finally, we save the Apache configuration file, do a syntax check and restart Apache using the commands below.

Again, when the source server is cPanel, the transfer of SSL files can be done from WHM too. For this, we go to WHM >> SSL/TLS section >> SSL Storage Manager and copy the relevant domain’s SSL files. 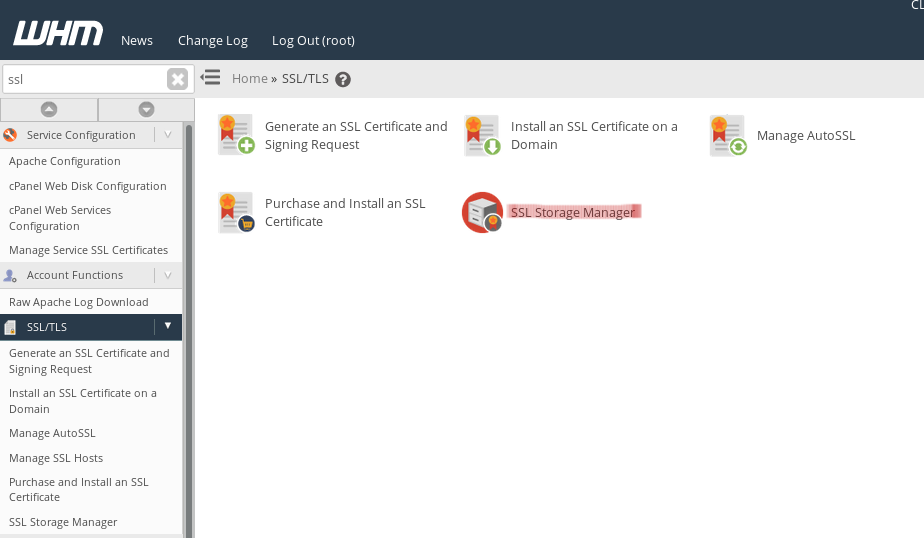 How we fixed common errors when moving SSL certificates

Here, let’s take a closer look at how our Support Engineers fix the certificate copying problems.

Recently, one of our customers contacted us with a problem after moving SSL certificates to another server. He was getting an error as follows.

This error means that private key loaded in the VirtualHost section of the .conf file didn’t match the SSL Certificate loaded in the same section.

Therefore, our Support Engineers had to find the .key file matching the .crt file and update the VirtualHost configuration accordingly.

Sometimes, we solve the issue by creating a new CSR from the existing private key file. For that, we use the following command.

Often, customers may face error after moving SSL certificate to another server due to missing modules too. It may be due to the absence of some module like mod_ssl on the destination server. Apache needs this module to generate SSL connections.

In such cases, to the fix the error, our Support Engineers install mod_ssl.

Again, the steps differ depending on the type of server. To enable this module on CentOS, we run the following command.

[Having trouble while moving SSL certificates between Apache servers? We’ll fix it for you.]