How we enabled PHP FPM Memcached for faster websites


Have you ever thought what slows down your server? This may be due to a large number of request for a database in a single time.

At Bobcares, we often get requests from our customers set up PHP FPM Memcached as part of our Server Management Services.

Today, we’ll see how our Support Engineers set up PHP FPM with Memcached and fix the related errors.

What is PHP FPM Memcached?

PHP FPM Memcached can speed up the delivery of the website’s data by storing the most frequently used resources in the cache. Therefore, it amplifies the customer experience through a better response time of the websites.

Here’re the steps how our Support Engineers install Memcached with PHP-FPM on Nginx.

1. Firstly, we run the following command to install Memcached.

2. After installing Memcached, we enable and start the Memcached service

3. Then we run the following commands to install PHP with Nginx and Memcached modules.

Moreover, to test whether the Memcached is properly installed, we use info.php file to test it. The output looks like, 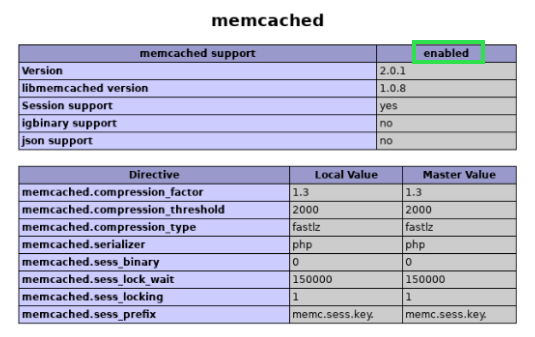 Related errors and how we fixed it

From our experience in managing server, we’ve seen that customers facing problems after installing Memcached. Let’s take a closer look at how our Support Engineers fixed the problems.

Recently, one of the customers reported problems with PHP FPM Memcached on their Amazon EC2 instances pool. But Memcache was not connecting on one of the servers.

On checking, our Support engineers found that Memcached was running on the server.

However, Memcached service was configured to listen on server address and this was creating problems here.

It is always recommended to use private IP connections between servers in the same datacenter. This will ensure a faster network connection and maximum service security.

Therefore, we set the Memcached service to listen on the private IP-addresses on EC2 instances instead of the public IP addresses. And, the problem was fixed.

Similarly, another customer had an issue after installing Memcached. He got an error “Fatal error: Class ‘Memcached’ not found” while enabling Memcached on the server.

Then our Support Engineers took the following steps to solve the error.

1. Firstly, we logged into the server as root user.

2. Then, we checked the status of service php5-fpm.

3. So, we found that the php5-fpm service was down.

4. At last, we restarted the php5-fpm service.

This is how we fixed the error.

[Having trouble while setting up PHP FPM Memcached? We’ll fix it for you.]

In short, Memcached increases the delivery speed of the website’s data by storing the most frequently used resources in the cache. Today, we saw how our Support Engineers setup PHP FPM Memcached and fixed related errors.