Amazon EC2 NAT – Here’s how we set up it

Options to scale up on a need basis make Cloud solutions like Amazon EC2 popular. Amazon EC2 allows to start with few servers and launch as many servers as you need.

That’s why, we often get requests from customers to setup network in AWS instances as part of our Managed Cloud Services.

Amazon EC2 is a service that allows the creation of virtual servers using previously configured templates. Thus, it eliminates the need to invest in hardware up front. Also it helps to develop and deploy applications faster.

Now, its time to see why we need Network Address Translation aka NAT.

Isolating virtual servers from internet really helps to enhance security. And, Amazon EC2 NAT setup is a quick way for this.

Thus, it allow instances in a private subnet to connect to the internet or other AWS services. Also, NAT helps to prevent the EC2 instances from receiving inbound traffic initiated by someone on the Internet.

How to setup NAT in EC2

Now, we know the benefits of EC2 and NAT. Its time to see how our Support Engineers enable Amazon EC2 NAT for our cloud customers.

AWS provides multiple ways to provide internet access to instances. It can be set up using an internet gateway directly connected to the virtual server, or using routing table. Similarly, AmazonEC2 help to create NAT gateway or NAT instance for public internet access too. Another quick option would be to enable Elastic IP address feature too.

The exact choice depends largely on the customer requirement. For instance, one of our AWS customer wanted multiple servers to have internet access from the same source IP. Therefore, we suggested him the option to create NAT gateway. We’ll now see how exactly our Dedicated Engineers setup network access for a customer using NAT gateway.

Finally, we completed the setup by ensuring that security groups allow outbound traffic over desired ports on instances.

There are options to add IP address on the EC2 instance from the Amazon Dashboard too. It shows the exact mapping between the public and private address. The exact interface look as shown in the picture. 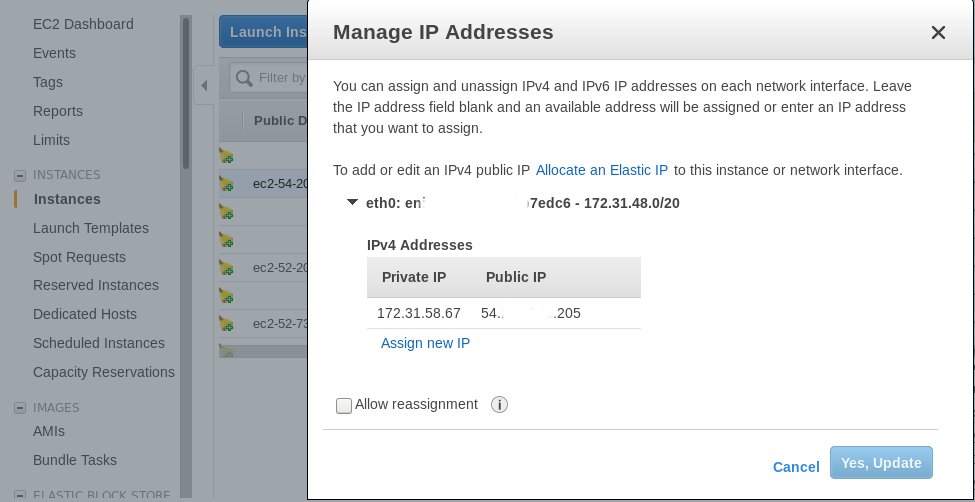 Now, its time to see the typical errors with Amazon EC2 NAT setup.

Unfortunately, connection problems often occur when using NAT instance.  Here, the instances in a private VPC subnet can connect to the internet, but have intermittent connection issues. The typical reasons for the error include operating system-level connection limits, network timeouts or access control lists configured on the server.

Recently, when one our customer reported connection problems, the culprit was the operating system-level connection limits.

Unfortunately, the connection limit was reaching on the vpc. To fix the problem, our Dedicated Engineers had to increase the operating system local port range by running this command:

Similarly, often updates in instances can fail due to wrong NAT settings. Here, the customer was trying to run “yum update” from the private instance. But he got the following error:

Therefore, to fix and make update running, we had to modify the iptables. Additionally, we setup IPv4 forwarding and disabled ICMP redirects too.

It’s even possible to use a Community amzn-ami-vpc-nat instance to workaround such problems.

[Finding problems with Amazon EC2 NAT setup? We can make it right.]

In a nut shell, Amazon EC2 NAT setup is one of the best ways to prevent the instances from receiving inbound traffic. Today, we saw the various methods to set up NAT, and how our Dedicated Engineers solve the top errors with it.

[ad_1] PhpMyAdmin allows easy editing of website databases. But, at times due to missing server modules or wrong permissions, PhpMyAdmin[...]